6 steps of scientific method is a procedure that has defined science since as early as Aristotle in ancient Greece. It consists of several intentional and logical steps aimed at testing a  hypothesis. If you grew up in the US, it’s likely that you first learned about the scientific method in elementary school when you had to apply it to create a tri-fold backboard science fair project that you displayed and stood next to in your school gymnasium. It’s also possible that you haven’t directly applied the scientific method to many experiments since then.

There are 6 steps of scientific method, each of which is described below. The figure below also summarizes the process. 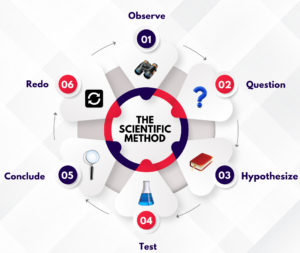 The 6 steps of Scientific Method to Trial Law – related example:

A potential client comes in for a consultation with you and says they were in a car crash where the other driver was found to be under the influence of alcohol, and the potential client’s back has hurt ever since the crash. (You don’t even have to directly observe this!)

There’s one critical question that needs to be answered in this case: Did the crash cause the back injury? While there are other questions (e.g., how likely is it that a jury will see it that way? How much is this case worth in damages?), these questions we come back to in the next step. When gathering information, you’ll know that you’ve had similar cases that have had positive outcomes for the client, and you’ll look through your client’s medical records to get a clearer picture of the case.

Having examined medical records and with previous experience, you can formulate a hypothesis: the car crash caused your client’s back injury. From this hypothesis, we can make predictions (based on the follow-up questions from the last point): We predict that a jury is sufficiently likely to also believe that the crash caused the injury, and we might predict the rough value this case might be worth. Let’s say $500,000 is your initial estimate for this example.

At this time, you’d create a survey to ask a representative sample of the general public about the case to measure their sentiment towards it, how much support there is in favor of the plaintiff and defendant, and how much they would award in damages to your client.

When you analyze the results, you find that 91% of the sample supports the plaintiff in your case and the average damages that the sample would award was $750,000. From this, you’d conclude that this case is likely to win in a trial, and the jurors would award a lot of money to the plaintiff.

Ideally, you’d then repeat this survey to make sure that the results from the first survey didn’t occur as a fluke.

It’s also important to note that 6 steps of scientific method isn’t a straight line – it’s a circle. This means that once you’ve drawn conclusions from the results of your survey, you should (or at least could) have new questions. These questions often sound like, “what if I reframed my case like this instead of that?” or “Does talking about this specific fact increase juror support more than this other specific fact?” These questions can be answered with a new survey or in a different method, such as in-person focus groups.

The purpose of the scientific method is, at its simplest, to answer questions. While many people in a very wide range of fields will trust their gut reaction, it’s not always right. For example, the Oakland Athletics, a relatively low salary-cap Major League Baseball team, found that after collecting enough data, baseball could be reduced, to an extent, down to statistically significant numbers.

This demonstrated that traditional baseball scouts were not especially good at identifying talent: their intuition wasn’t always correct. As such, the Athletics were able to use the scientific method to identify players who were more likely to bring success to the team.

Of course, trial law isn’t the same as baseball: every case that you take on is very different from each other, and there are far fewer cases than baseball pitches. If every lawyer went to trial several hundred times per year, then we’d be able to measure lawyer performance analytics to the depth that baseball can! With far fewer data points (in this case, each case is a data point), it means that there’s more room for gut instinct as data shouldn’t be the only thing used in these cases.

However, data is likely to be able to answer the more nuanced questions than gut instinct ever could, such as “what kind of jurors do I want to keep/remove from my jury?” Machine learning can create complex predictive models that can confidently create the profile of a plaintiff-perfect (and, conversely, a defendant-perfect) juror, far beyond heuristics such as “Republican voters typically award less in damages than Democratic voters”, or other such simplistic statements which may not even be true in many scenarios.

Lastly, this blog post has talked a lot about using data and the 6 steps of scientific method to Trial Law. In reality, you don’t even have to go to trial for the scientific method to be of use. If you’ve collected data that says that a case is worth x dollars and the defendant offers you a lot less than that during mediation, you can be confident knowing that a jury is likely to award a number much closer to what you’re seeking, despite the defense telling you that it’s a good offer and that you’d be crazy to not accept it.

Or you can go on the offensive and say “I’ve collected data from 500 potential jurors on this case, and I know it’s worth at least $1,000,000 (or however much the jurors said the case was worth).” The defense may realize that you aren’t just basing your number on a gut instinct like they might have done, and conclude that the case will cost them much more if it goes to trial.

The 6 steps of scientific method allows researchers to answer questions about observations they’ve made. This includes lawyers who want to determine whether a case is worth taking on, in terms of whether a jury is likely to rule in favor of the plaintiff, and how much they’re likely to award in damages.

This can greatly help any plaintiff lawyer, whereas gut feelings – which certainly can be very useful in trial law – can be limited, or even incorrect. Knowing what hundreds of members of the public think about your case can provide much more insight than you would have otherwise.