This is the second in a series of posts about memories of eyewitness testimony. The previous post described how memories are formed and remembered, and now we’ll talk about how memories decay can be distorted and manipulated. The final post will give some suggestions on how to maximize the amount and accuracy of information an eyewitness provides. 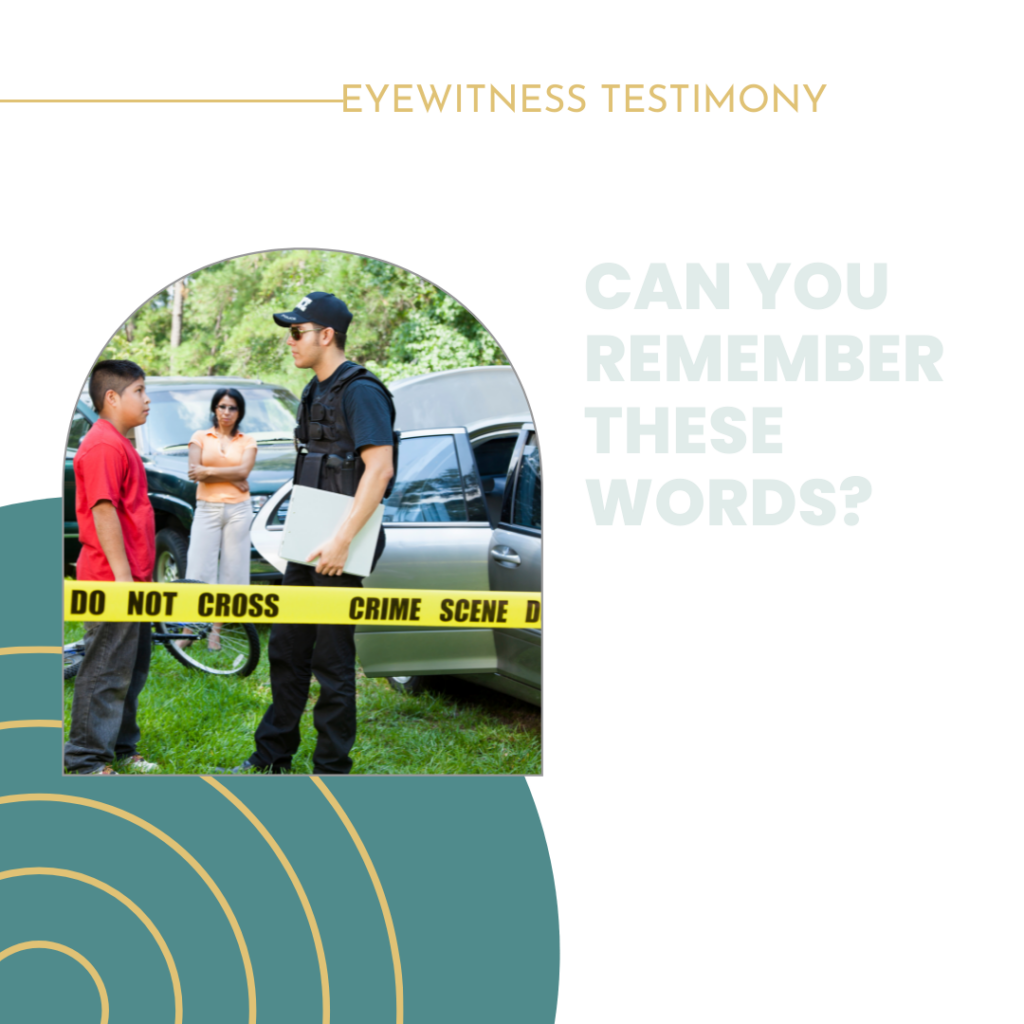 Please take a few seconds to try to remember as many of these words as possible (we’ll come back to them later): door, glass, pane, shade, ledge, sill, house, open, curtain, frame, view, breeze, sash, screen, and shutter.

In the previous post, we learned how information enters short-term memory, where it has to be rehearsed for it to be successfully encoded into long-term memory. However, we also learned, using John Dean’s testimony from the Watergate scandal, that long-term memory isn’t a tape/video recorder – it’s self-centered and highly subjective. Without rehearsal of information, long-term memory can be highly inaccurate, even when trying to recall the ‘gist’ of the events in question. In short, it’s a representation of what we think happened. This post is going to cover the fallibility of memory and the misinformation effect. That is, some ways of how it can be forgotten and distorted, and even how entirely false memories can be created.

Research by Professor Elizabeth Loftus in this area has been influential for almost the past 50 years. Professor Loftus has testified as an expert witness in many high-profile legal cases, including those of Ted Bundy, Ghislaine Maxwell, and Harvey Weinstein. Her research on memory began in the 1970s with one seminal study of particular interest: Participants viewed short films of car accidents and were then asked questions about the accident. Participants who were asked “About how fast were the cars going when they smashed into each other?” reported higher speed estimates (40.8 mph) than questions which used collided (39.3 mph), bumped (38.1 mph), hit (34.0 mph), or contacted (31.8 mph) in place of smashed.

Furthermore, when the same participants returned one week later, those who had been asked about the speed at which the cars smashed into each other were significantly more likely to recall seeing broken glass in the accident, despite the fact there was none. This implies that the way a question is asked can greatly influence the answer that is received – and influence how questions are answered a week later.

In a similar follow-up study, Loftus showed a new sample of participants a series of fast-occurring events, like car accidents or classroom disruptions, and then investigated how the phrasing of questions asked immediately after the event would influence recall of the memory after one week. Half of the participants were presented with a question containing apresupposition (i.e., it suggests that an object was in the scene of the video), but half of these were false presuppositions. For example, some participants were asked “How fast was the car going when it passed the barn while traveling along the country road?”, while others were asked “How fast was the car going while traveling along the country road?”, when there was no barn in the video. A week later, 17.3% of the participants who received the barn question reported remembering the nonexistent barn, whereas only 2.7% of participants who had not had any previous mention of the barn mistakenly recalled seeing it.

Loftus proposed that this is due to two kinds of information forming memories: first, the information we perceive as the event occurs (following the rehearsal and encoding discussed in the previous blog post), and then external information supplied after the fact – after the fact does not even have to be especially long after the event. Over a period of time, it may become the case that information from these two sources has been integrated to the extent that we are unable to tell where a specific detail originated.

Related to Loftus’s framework, another major factor in forgetting and distortion of memories is time: even the very first known study of memory, dating back to 1885, found that people are unable to retrieve about 50% of information 1 hour after encoding (i.e., learning the information). Losing such a large amount of information in such a short period clearly has significant implications for eyewitness testimony – it’s unlikely that many eyewitnesses would have even given a statement to police within an hour of an event they witnessed occurring. This does not even account for extended periods where the witness may see media reports on the event, which could then distort the memory.

Lastly, it is possible for entirely false memories to be created. Try to remember (no scrolling!)  the words from the beginning of this post. From the list below, pick the words that you remember:

If you compare the words you think you saw earlier with the list at the top of the post, many readers would have mistakenly thought they saw “window” when it does not appear in the first list. It is thought that this can occur due to implicit associative responses. That is, a list of words that one associates with “window” are shown, and after a short distraction, the key word is also activated in memory along with the other associated words.

When applied to a law context, there have been many cases (particularly in the 1980s and 1990s) where an adult “recalls” false memories of sexual abuse from their childhood during therapy sessions as a result of suggestions from the therapist. Traumatic cases like this can have drastic effects on the lives of the individual who has these memories planted in them, as well as their families and the accused perpetrator.

As a brief aside, some readers may be wondering if a person’s confidence can predict the accuracy of their memory. For example, it seems reasonable to think that a jury could be strongly persuaded by a person in the witness box pointing at the defendant saying, “I’m 100% certain I saw that person at the scene of the crime”. Yet, having confidence of a memory is not associated with the accuracy of that memory at all. In fact, one of the only things we can be confident about in terms of memory confidenceis that men are almost always more confident than women in terms of memory accuracy, despite no meaningful differences between the sexes.

As in the previous blog post, memories are fragile and subjective at the best of times. It is only a representation of what we think happened during an event, and is certainly not a completely accurate account by any measure. Even if incoming information is encoded and rehearsed relatively accurately, it is still very possible for distortions to occur as a result of external suggestions, and even entirely false memories can be implanted and can flourish through the power of suggestion. In short, it is very easy for a misinformation effect to occur.

In the next post in this series, we’ll discuss different methods to increase the amount of information recalled by an eyewitness, and the accuracy of the information.

Loftus, E. F. & Palmer, J. C. (1974). Reconstruction of Automobile Destruction: An Example of the Interaction Between Language and Memory. Journal of Verbal Learning and Verbal Behavior, 13, 585-589.