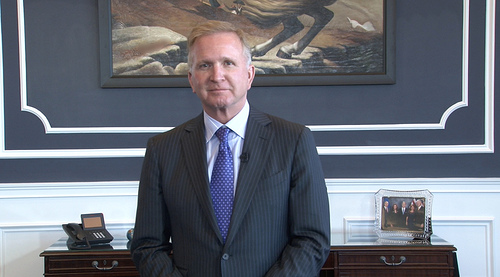 People often ask me how I got into my profession, and the best way I can put it is that I stumbled upon it, by accident really. I was 13 years old, being raised by a single mother with an 8th grade education, who worked two jobs making minimum wage to support my brother and I. There’s no other way to put it –we were poor. My brother and I fortunately made it through higher education on scholarships, grants and loans. We did anything and everything we could to scrape up enough money to get our educations. We were lucky too that our mother instilled in both of us an incredible work ethic and an insatiable appetite to learn, despite her lack of education.

So I was just riding my bike thru town and stumbled upon the courthouse. I didn’t know it was a courthouse at the time. I just had an urgent need to find a bathroom, and the courthouse was a public building, so I went in there to find the restroom. Just as I was walking out, I saw these BIG doors and curiosity got the best of me. I wondered what was behind them. So I quietly peeked in and there was a trial going on. It was just starting, the opening statements of this trial were underway and it involved a very sad case. It was of a man who had lost his entire family to a drunk driver. His wife and two kids, were in the car and they were hit by this drunk driver in an intersection, and all killed. This man’s entire family was wiped out, gone, over something so unbelievable. I was extremely interested in this case so I sat down, and I watched the proceedings. After watching the opening statements, I was so mesmerized that I cut school for the next two weeks, and would tell my mom, I’m riding my bike instead of taking the bus and I would go and I would sneak down and watch this trial until its conclusion. Of course eventually the school called my mother and told her that I hadn’t been in school for the last two weeks and was concerned, wondering if there was anything wrong. Boy did I get into a lot of trouble! Even when I did my very best to explain to her where I was, she did NOT care. My mother’s primary focus was on my education and there were no excuses, “That’s it,” she sternly said, “you need to be in school!” So I still went to the courthouse, but this time I’d go every day after school from the time I was 13 until I was 15 years old. Once school would let out, I would ride my bike as fast as I could down to the courthouse and stay there until 5 o’clock when it closed. I would jump from courtroom to courtroom, watching lawyers argue and watching all different types of trials. That is when I knew. I knew right then and there that this is what I wanted to do for the rest of my life.

What I saw and realized in watching all these trials was that there were individuals out there representing people who could not represent themselves. Sometimes it’s large corporations and defendants who are being represented by lawyers, but everyone deserves to be represented. Everyone should be able to get and have access to good and fair representation. And so this is what inspired me. It was something that I knew I wanted to do and believed I could do it. So I went through the process. Got through school and college and then made it through law school.

There are a lot of books out there and a lot of seminars you can attend, trial advocacy law classes, etc. but all of this learning takes a long time to absorb as well as understand how to execute effectively. What’s funny, when I got out of law school, I realized very quickly that I had learned more about trying cases in those few years that I would sit in the back of the courtroom after school and watch those lawyers try cases then I’d ever learned about trying cases in law school.

This is why I am where I’m at right now –on a mission to share my vast knowledge and experience to collaborate with other legal professionals in a collective pursuit of justice for clients. Recently, the Robert T. Eglet Advocacy Center entered into a collaborative partnership with UNLV Boyd School of Law to help promote their trial advocacy program, providing UNLV law students the opportunity to develop and fine-tune their trial advocacy skills. Our firm, Eglet Law, also offers law school scholarships based on financial need and other attributes. I’ve also recently been working with a team of top application developers and data scientists to develop an extraordinary tool to help trial lawyers analyze and select jurors. It’s called Jury Analyst. It integrates a software suite and iPad app developed around a process of my own proven strategies, sure to revolutionize your jury selection process.